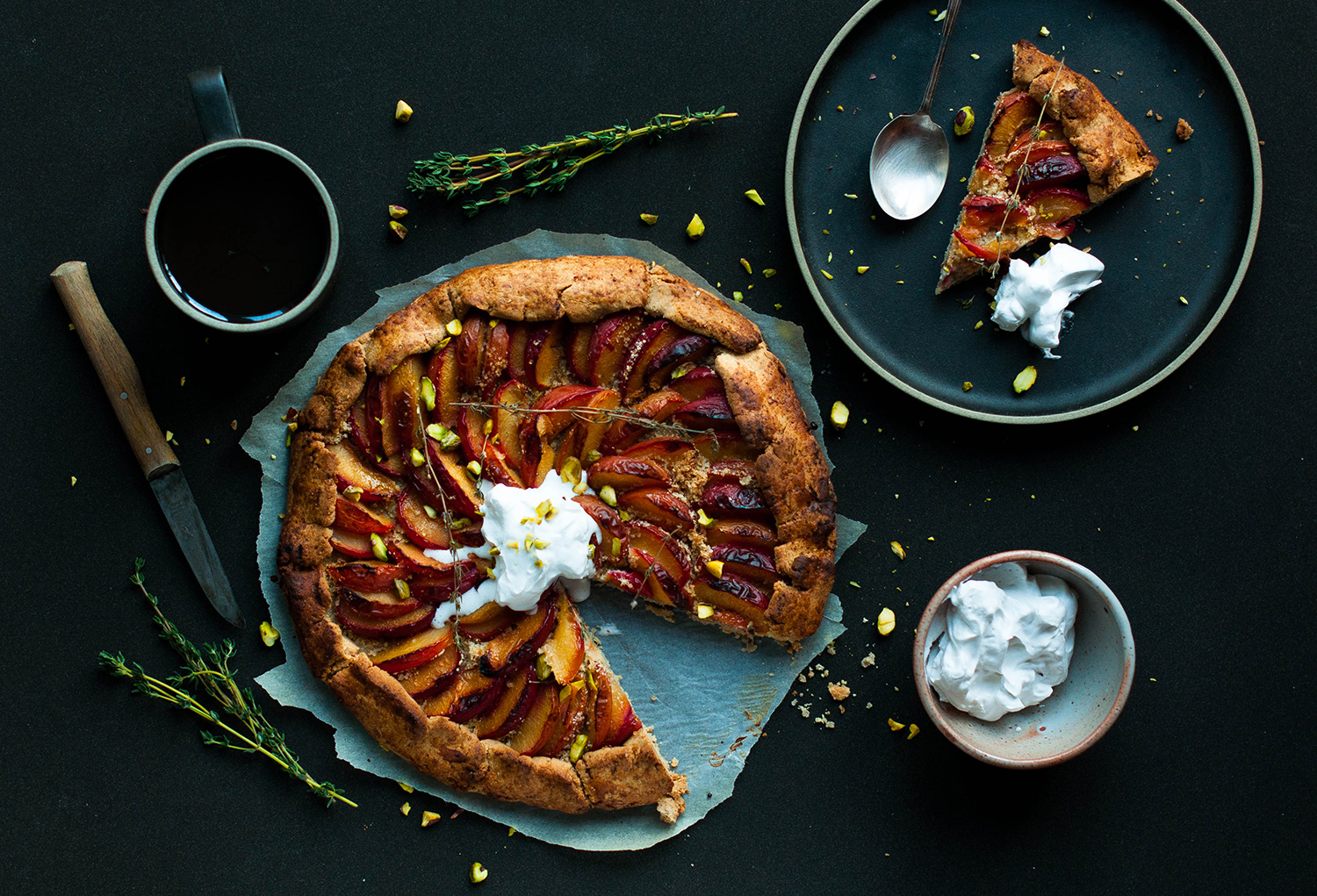 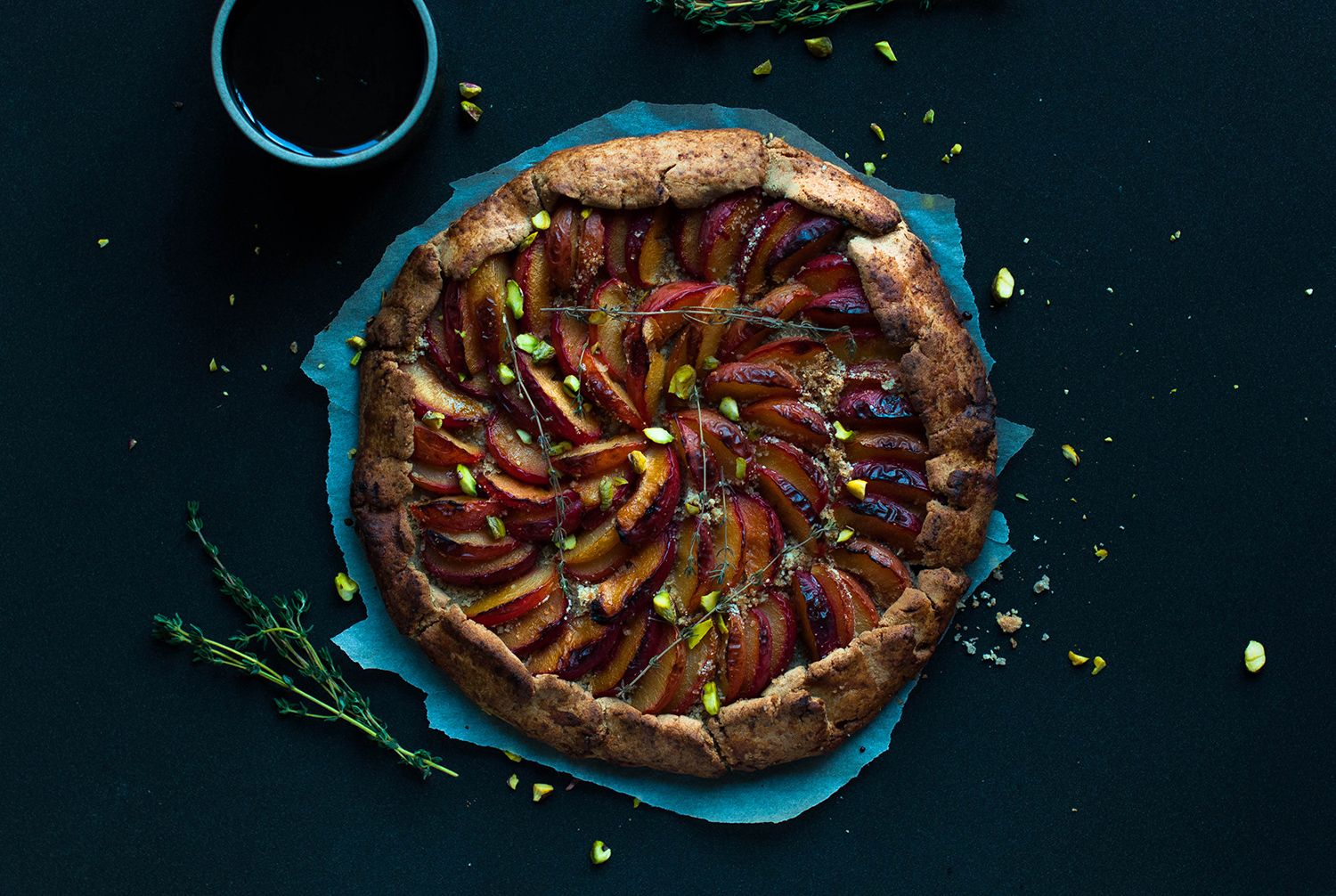 Funnily, until this very day I thought the only right way to make a galette is to make a savoury version of a crêpe, with buckwheat flour for the batter and savoury fillings inside. Well, turns out the internet names quite a few options of baked goods “galettes“, not just in the French cuisine, but worldwide. Galettes can be pancakes, can be tarts, can be cookies (in French Canada at least), … A little confusing, isn’t it? 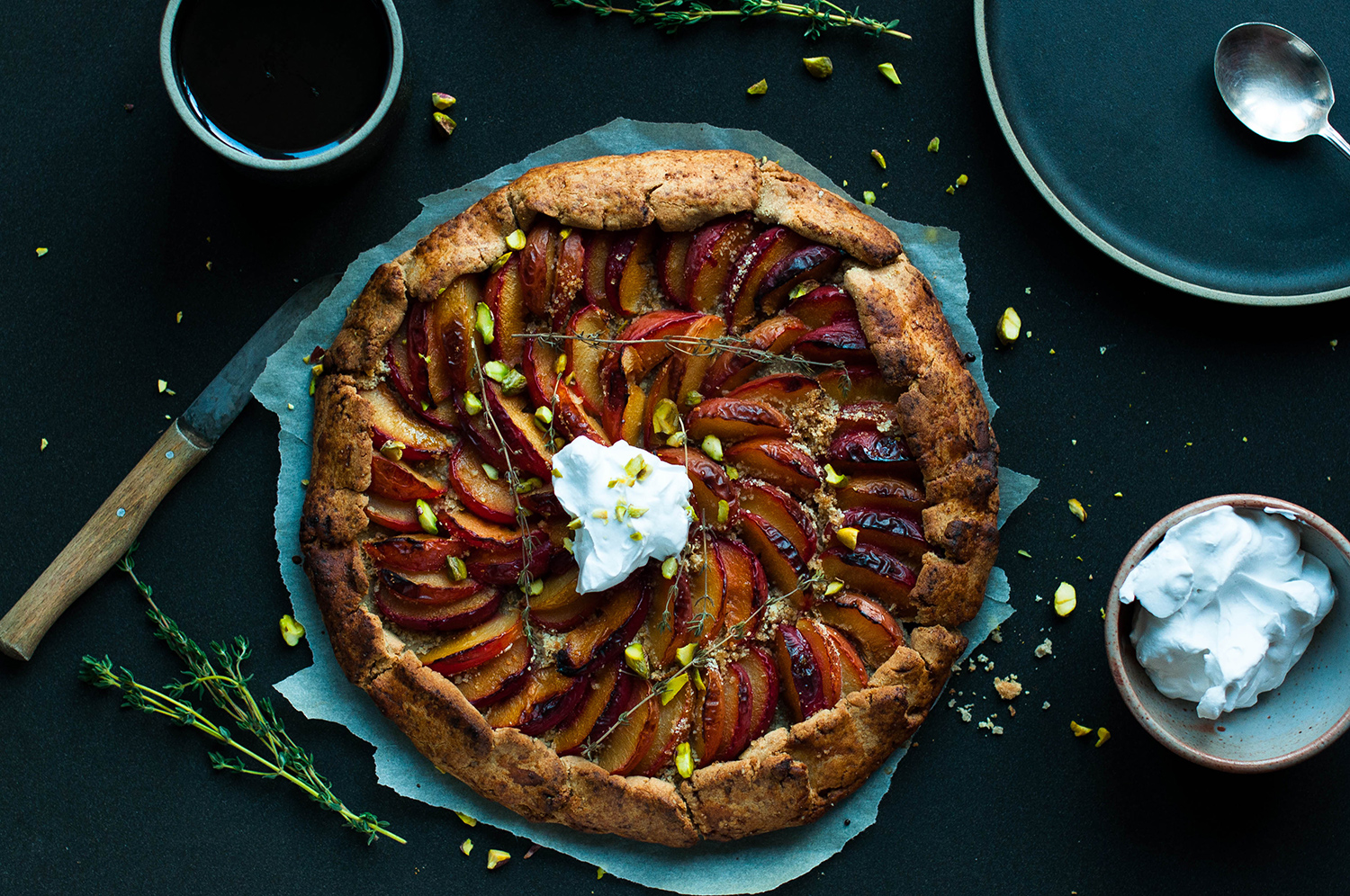 Apparently though I’ve made a plum galette this week, and it is not called a tart because the crust is folded. Speaking of the crust, which I made with buckwheat flour to give it a nutty taste, is deliciously buttery and crunchy, and the plums are soft and sweet. Pinterest inspired me to further top the galette with thyme before baking it, and alongside the whipped coconut cream, which I served the galette with, it turned out to be a picture-perfect coffee cake, afternoon treat, Sunday bake, or whatever you may want to make it for. 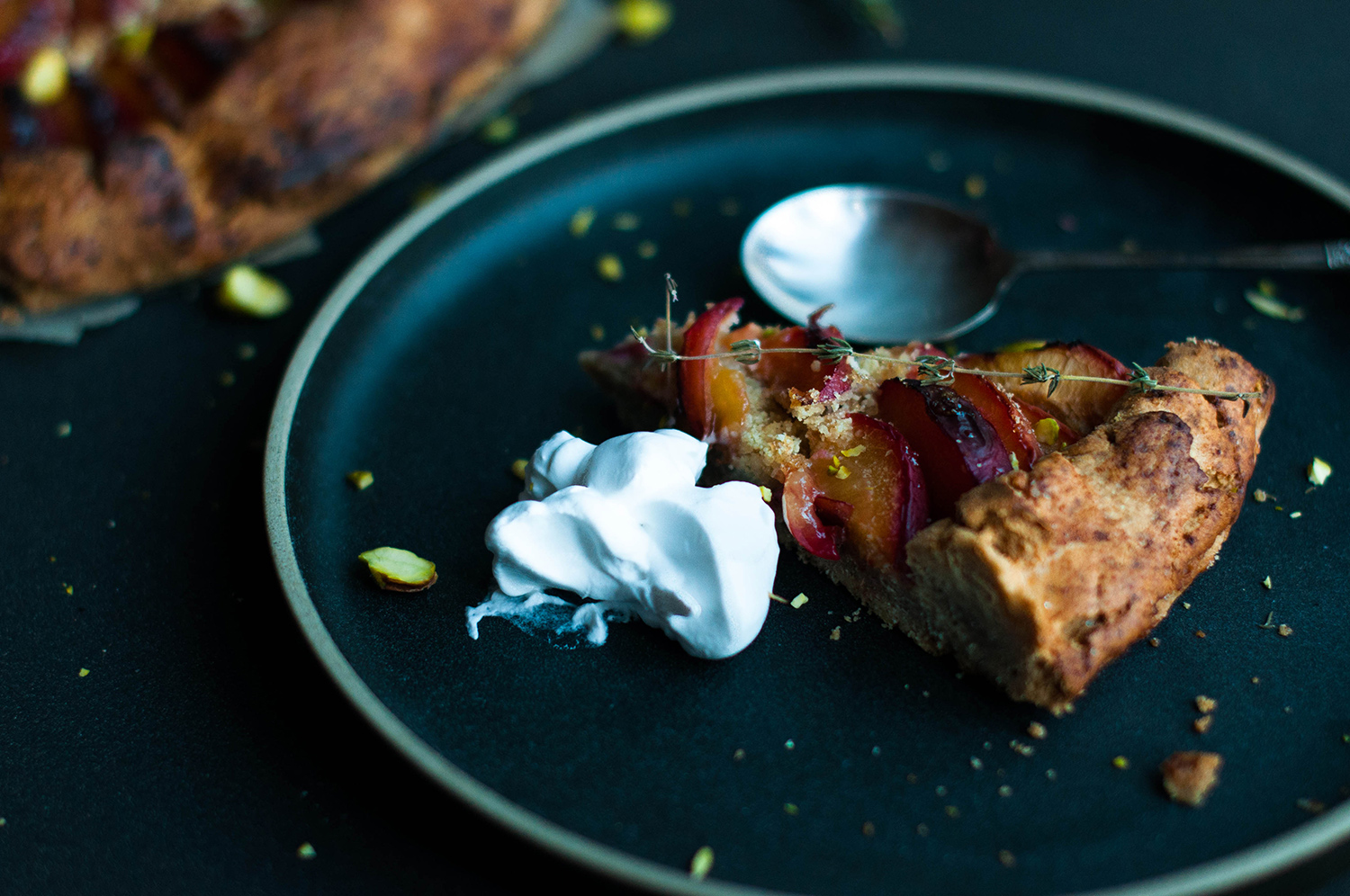 The buckwheat flour makes this plum galette naturally gluten-free, and if you wanted to make it vegan simply swap the butter for coconut oil, and use any non-diary milk for brushing.
In terms of the whipped coconut cream, make sure you buy good quality coconut milk with a high content of coconut extract, and do not shake it to allow the cream to separate from the liquid. 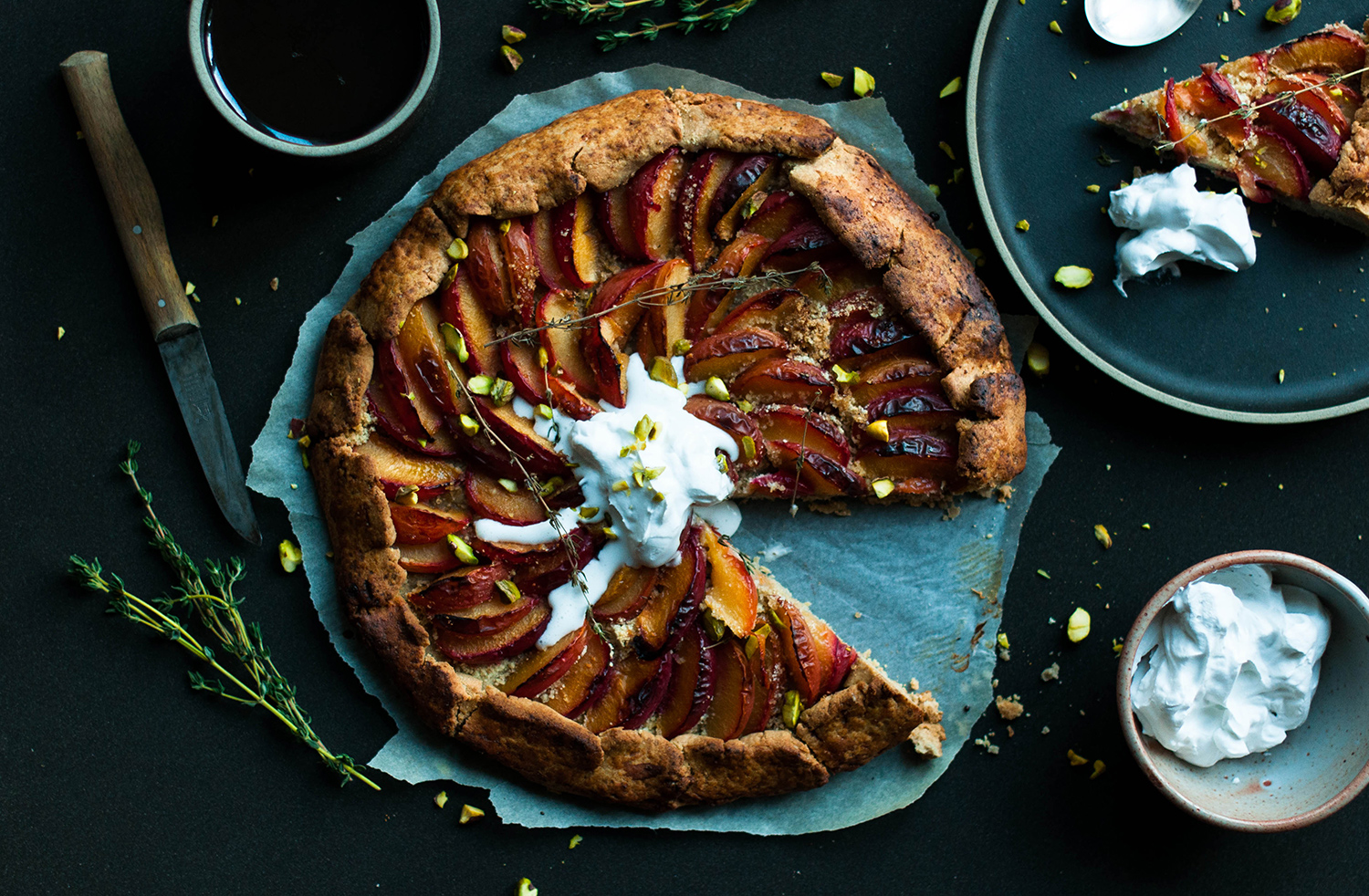 But enough of that, I’m not trying to scare you all. If I can make a galette like this one at my first attempt ever, you can, too! Tag any photos on Instagram, Twitter and Co. with #happilyhealthy. I would love to see all your plum galettes. 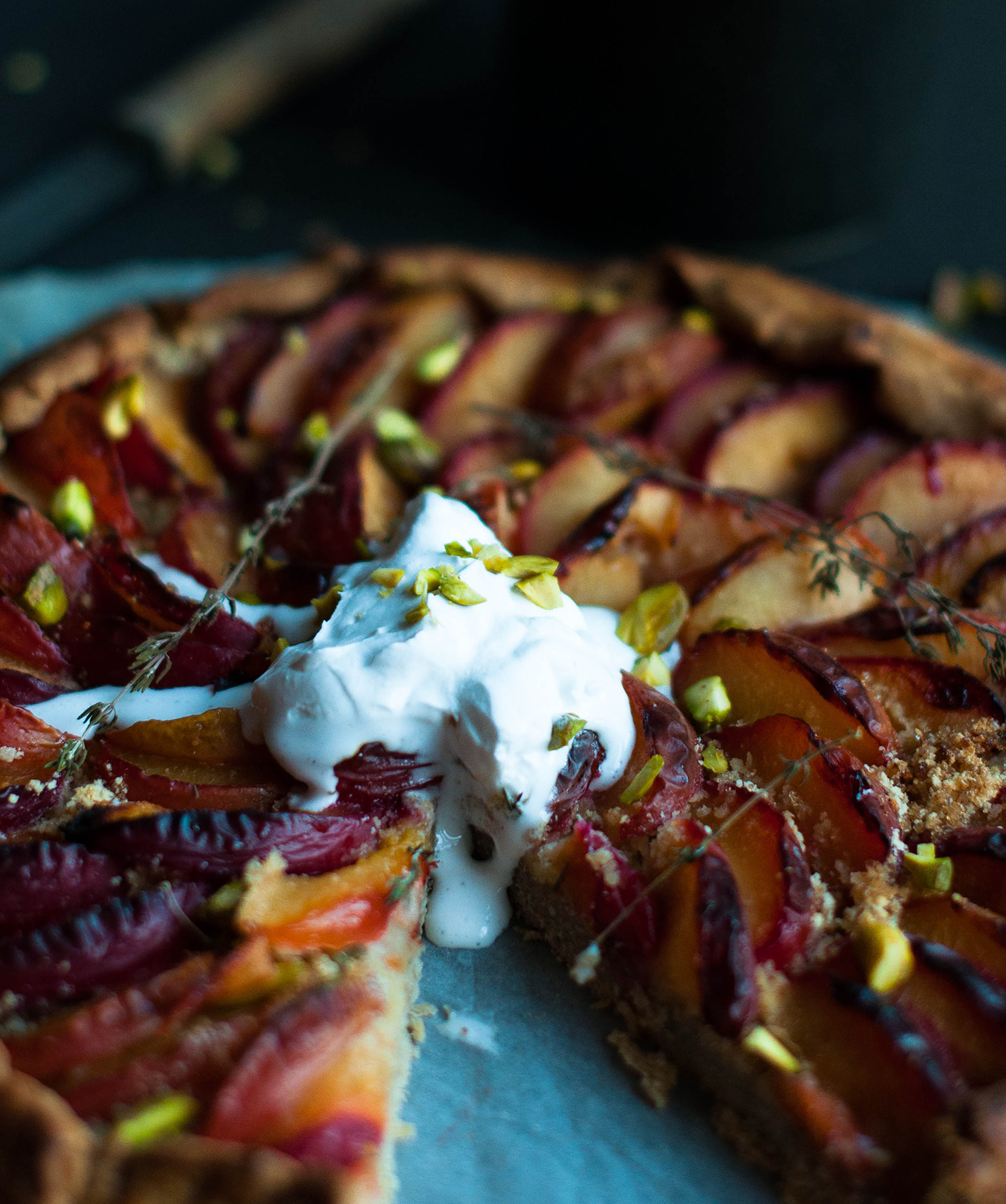 Method:
For the crust, mix the buckwheat flour with brown sugar and salt. Knead in the butter, cube after cube (either with your hands or let a food processor do the work). Add the water and quickly knead until the dough comes together. Wrap it in clingfilm and refrigerate for at least 30 minutes.

In the meantime, mix the ground almonds with the buckwheat flour and brown sugar. Set aside.

Wash and core the plums, and slice each plum into eights.

Remove the crust from the cling film and knead it once again with the palms of your hands to soften it a little. (If it is too hard to knead it, leave it at room temperature for a few minutes.)

Roll out the crust between two layers of cling film to a 30 cm (12“) circle. Transfer the crust to the baking tray and spread out the almond mixture on it evenly, leaving a 4 cm (1,5“) border around the outside.

Arrange the plum slices on the crust spirally, starting in the centre of the crust. Fold up the edges of the pie over the outer layer of plums. Brush the pie border with a bit of milk. Sprinkle the brown sugar over the plums and top the galette with a few sprigs of fresh thyme.

Bake the galette for 35 – 40 minutes, covering it with aluminum foil to prevent it from becoming too dark. Remove from the oven and allow to cool slightly. Serve the galette warm or cold with whipped coconut cream (see below) and a sprinkle of pistachios.

The galette can be kept in the fridge for up to four days.

Method:
Chill the coconut milk in the fridge overnight to allow the cream to separate from the liquid.

Place a mixing bowl in the freezer for 10 minutes before whipping the coconut cream.

Remove the coconut milk can from the fridge without shaking it. Open the can and scrape out the cream with a spoon (use the coconut water for cooking or smoothies), place cream into the mixing bowl.

Beat the cream for up to a minute until creamy and smooth. Add the maple syrup if using and whip for another few seconds.

The whipped coconut cream can be kept in the fridge for a few days. 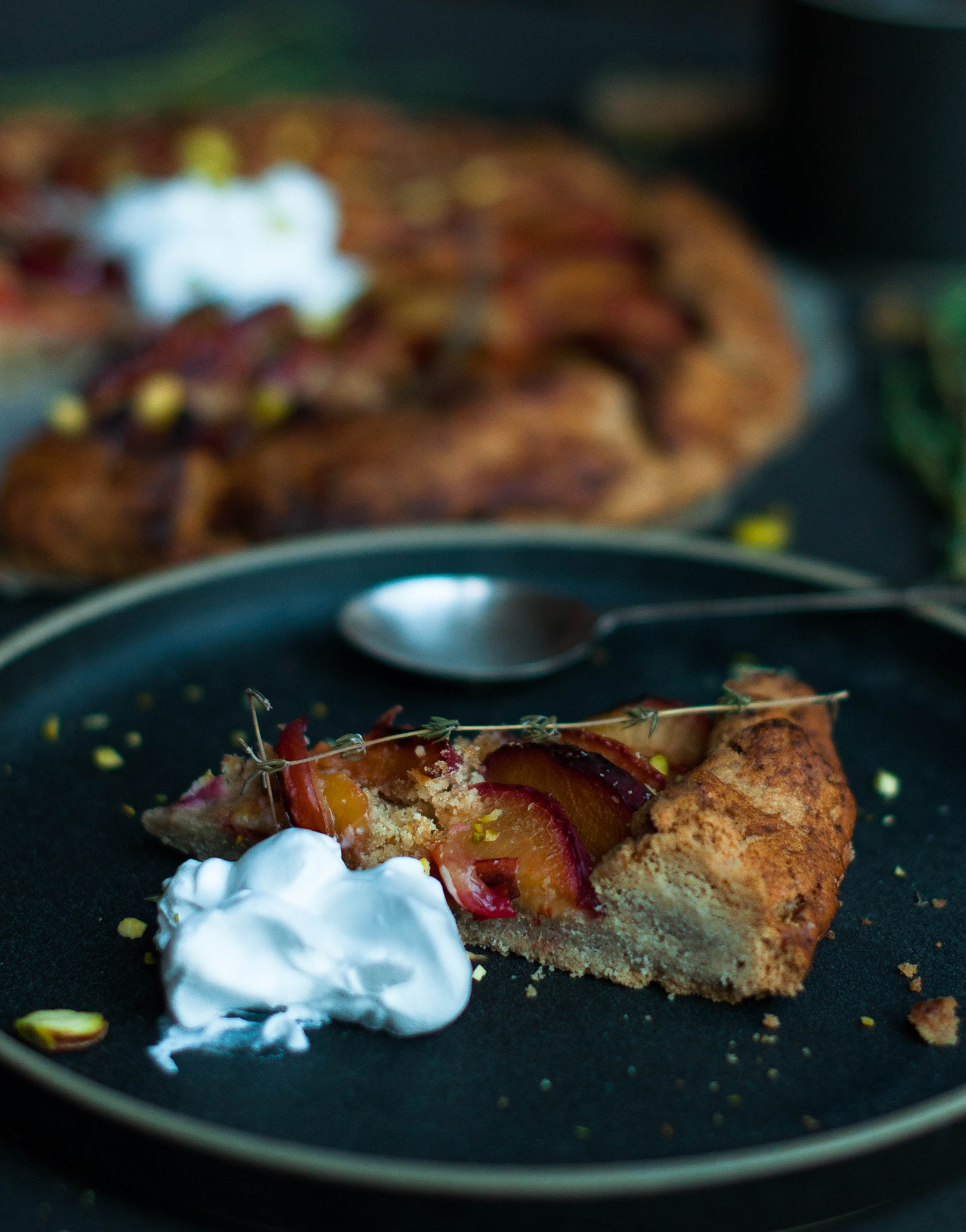 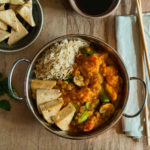 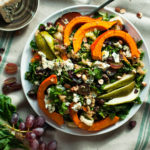 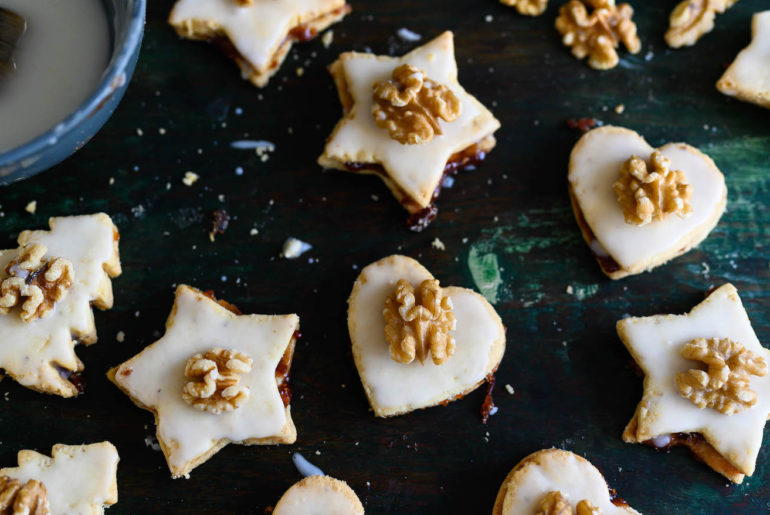 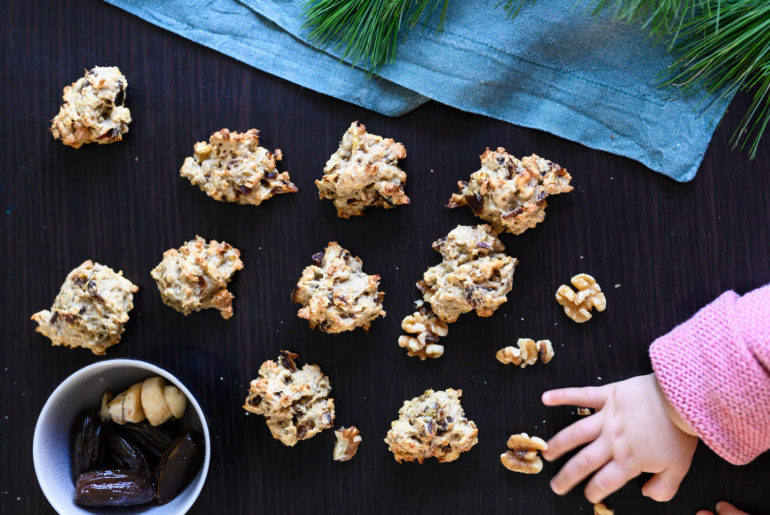