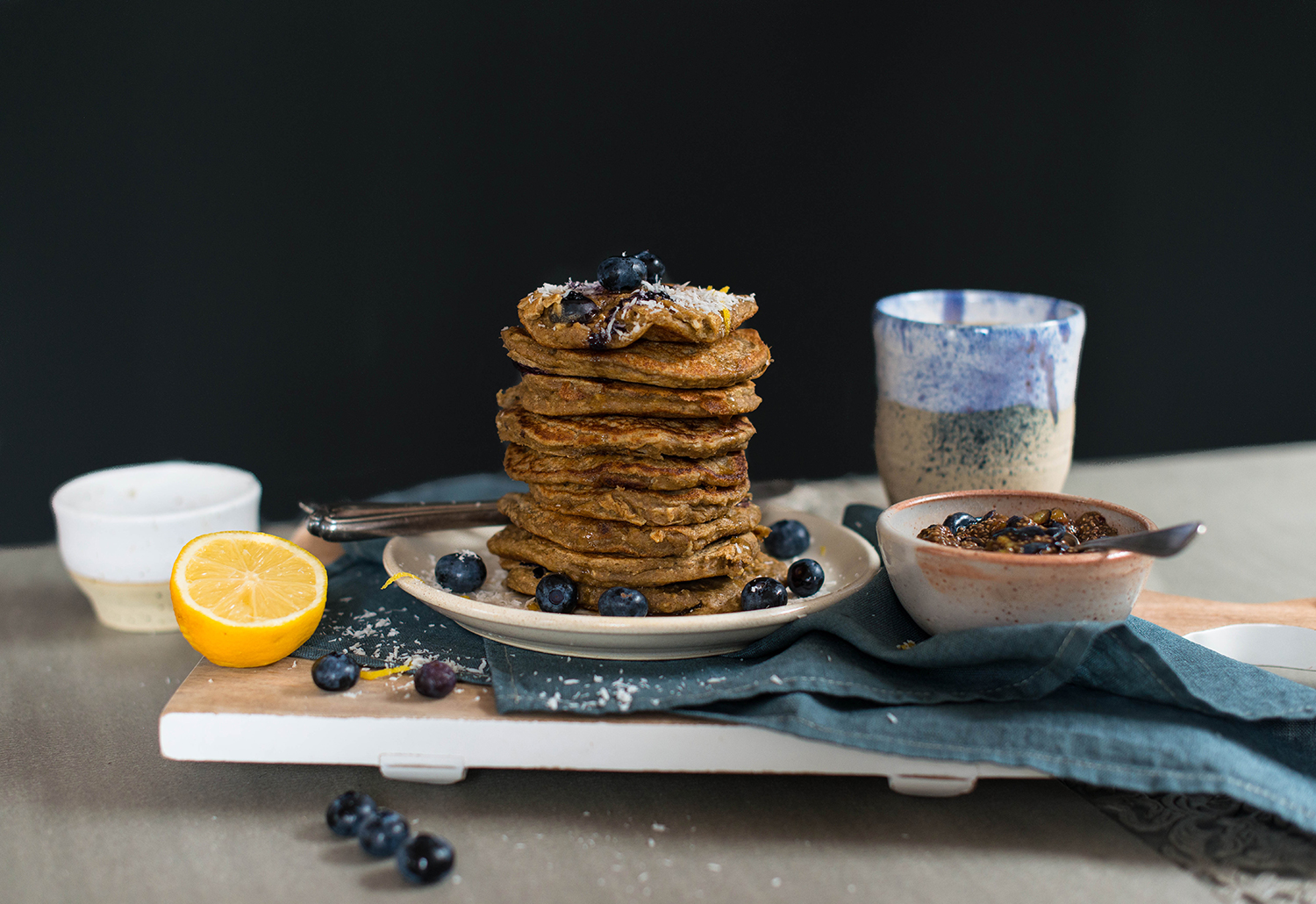 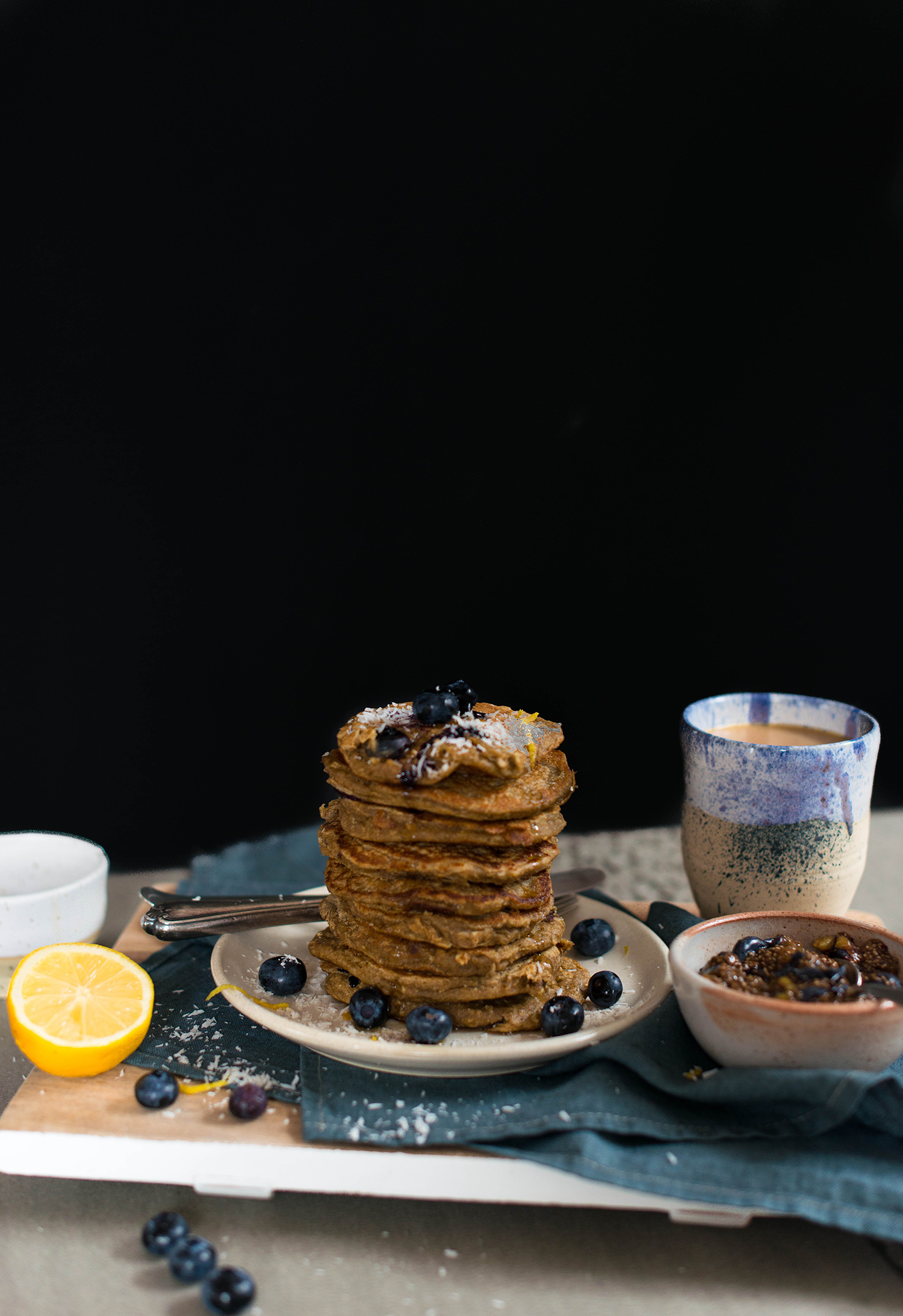 If you own my book “Happily Healthy“ or are a regular reader of this blog, you may have a clue about my pancake obsession. I am adding pancake variations on a regular basis, may they be American style pancakes or thin French crêpes. 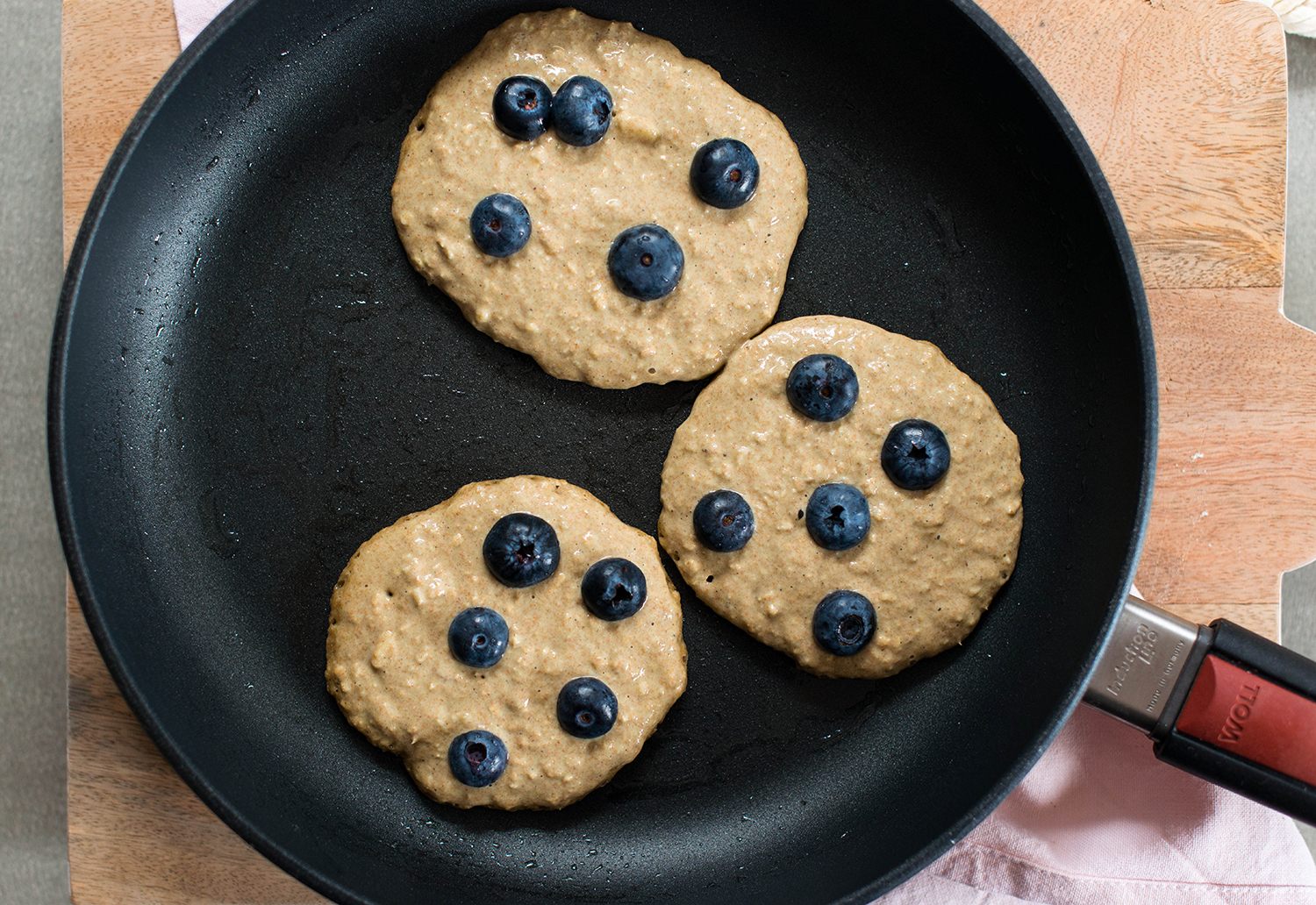 Veganz asked me to come up with a vegan recipe using their hemp protein powder, and I figured vegan protein pancakes would be a good idea. In case you fear that these pancakes won’t be fluffy due to the missing beaten egg white, do not worry: The baking soda, almond milk, banana and desiccated coconut make them both fluffy as well as moist. 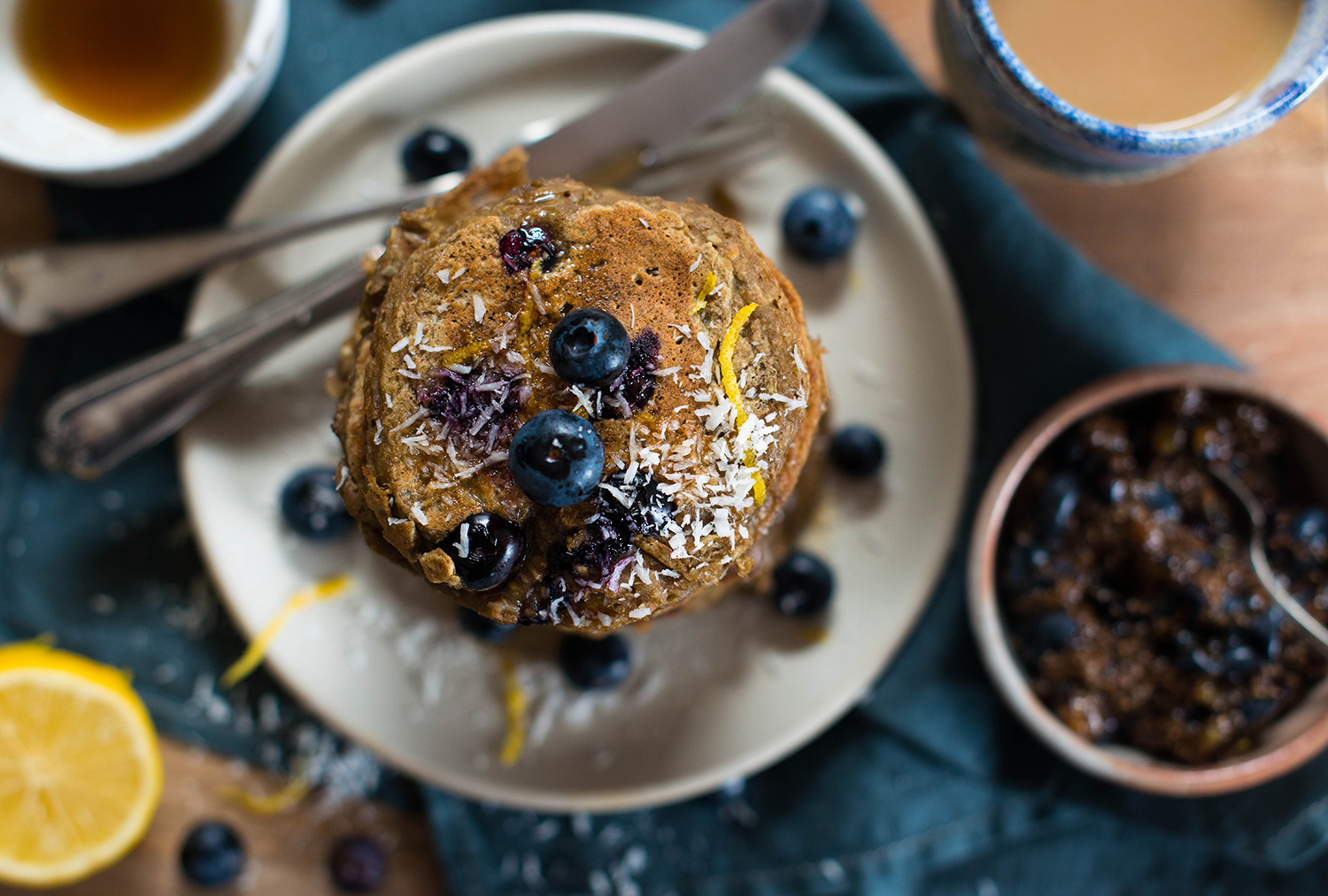 Apart from that I added oats and spelt flour to the batter and hided juicy blueberries in each pancake. Speaking of blueberries, I served the little “cakes“ with a raw blueberry chia compote which is similar to the one I also served these waffles with. 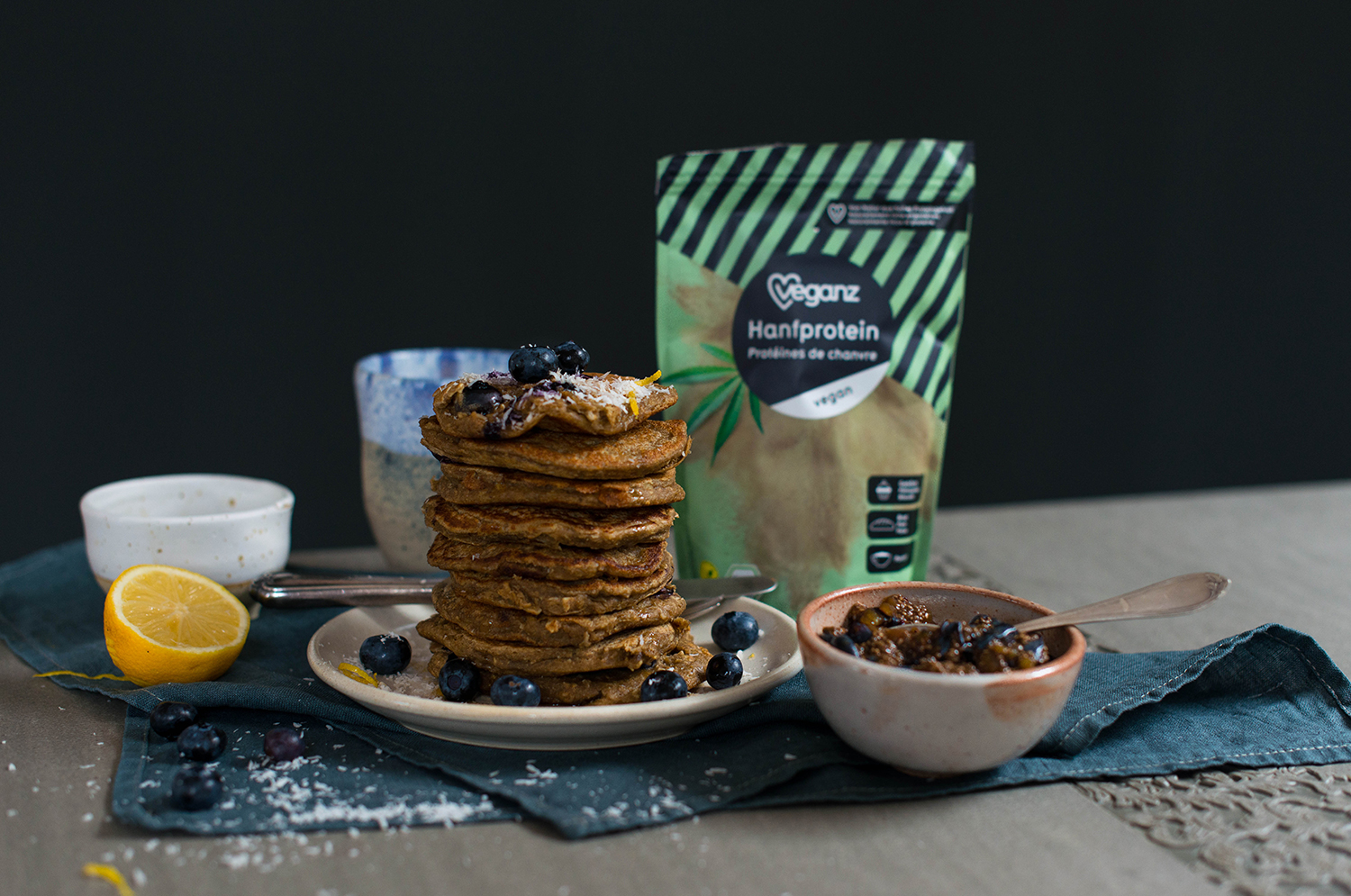 Obviously it is entirely up to you how, when (and if – but I highly recommend you do) you serve the vegan protein pancakes.

Either way, enjoy – and have a lovely weekend! 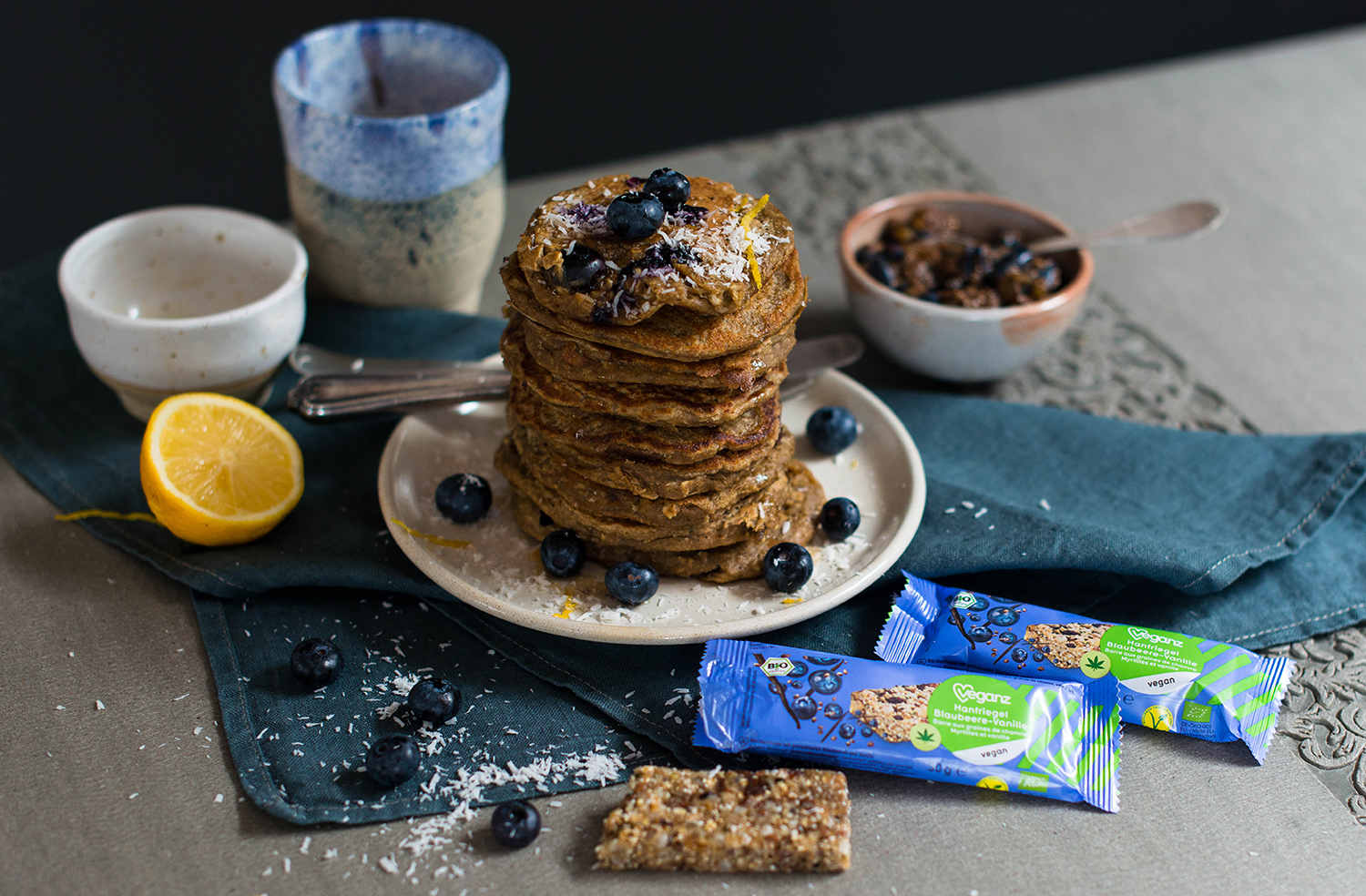 Method:
For the blueberry chia compote mash the berries in a small bowl with  potato masher or fork, stir in lemon zest and juice, maple syrup and chia seeds. Set the compote aside for 10 minutes to allow the chia seeds to soak and make the compote gel-y.

In the meantime peel and mash the banana. Scrape out the vanilla pod, whisk together the vanilla, banana and plant-based milk.

Heat some coconut oil in a pan, reduce the heat to a medium level and add little batter circles to the pan. Arrange a few blueberries on each pancake, bake the pancake for 2–3 minutes until golden brown, then carefully flip the pancakes and bake from the other side until golden brown.

Arrange the pancakes in a pile and keep them in the oven at approx. 75°C. Proceed equally with the remaining batter

Serve the pancakes with the blueberry chia compote and (optionally) with maple syrup, desiccated coconut and / or hemp seeds. 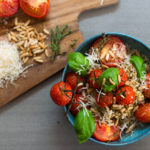 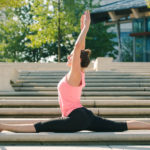 Weekly vlog: A 20-minutes vinyasa flow yoga session for everyone