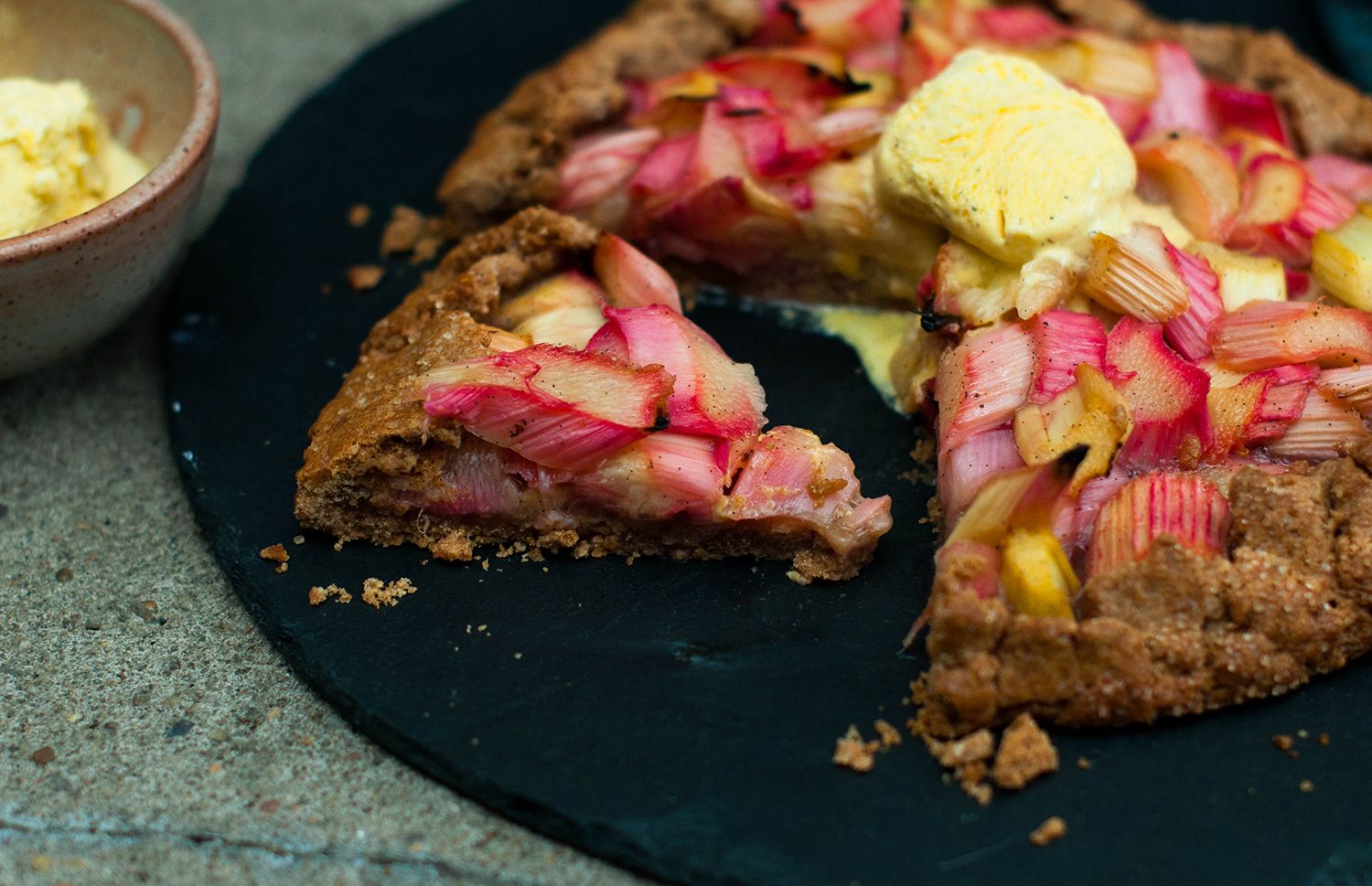 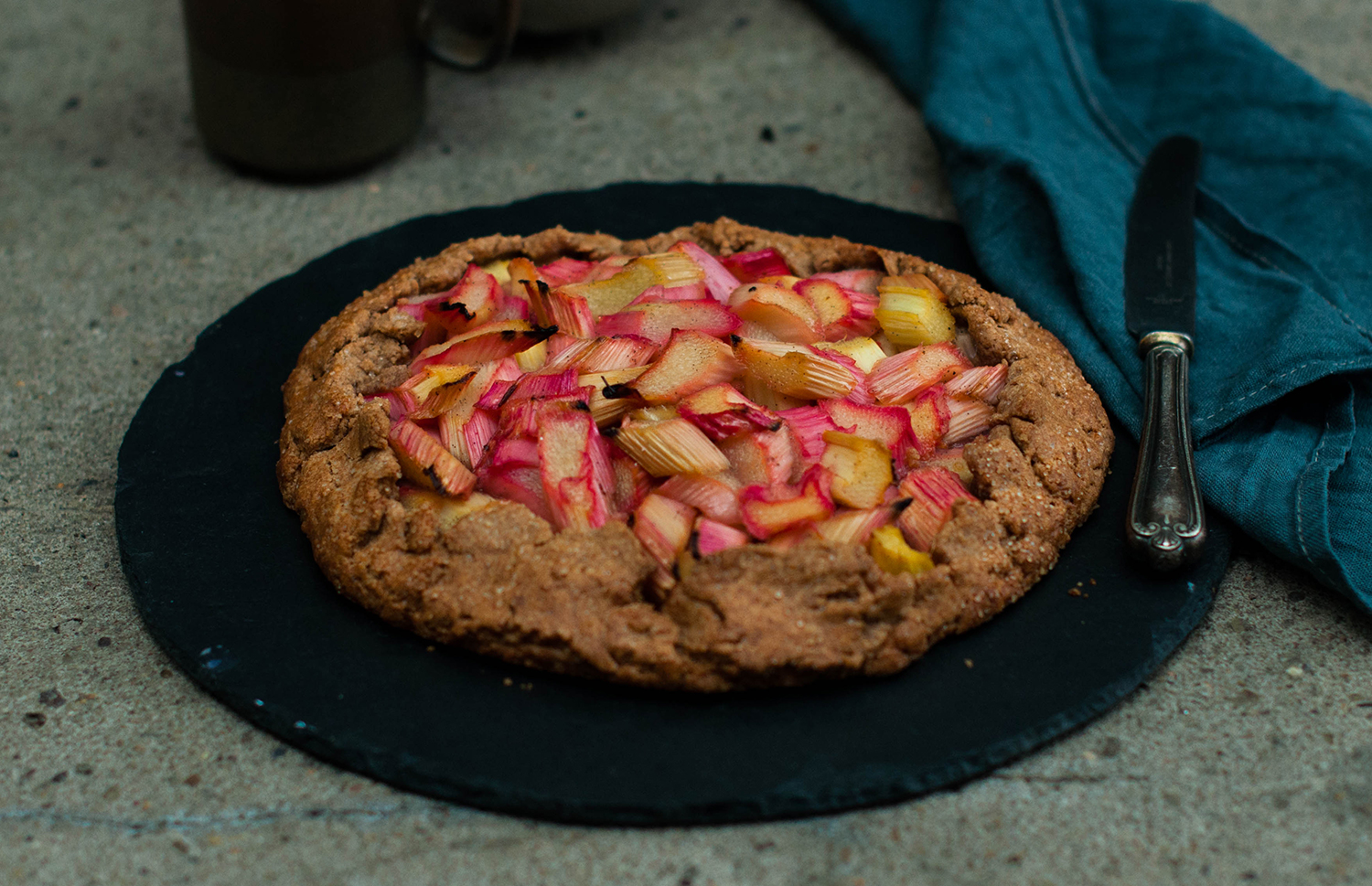 I’m basically inhaling rhubarb at this time of the year, and the fact that the season will be over in just about a month’ time already gives me anxiety, literally. Sadly, rhubarb can’t be enjoyed “just as it is“ (like strawberries, for instance), and I totally understand when that’s the exact reason for you to stay away from it. 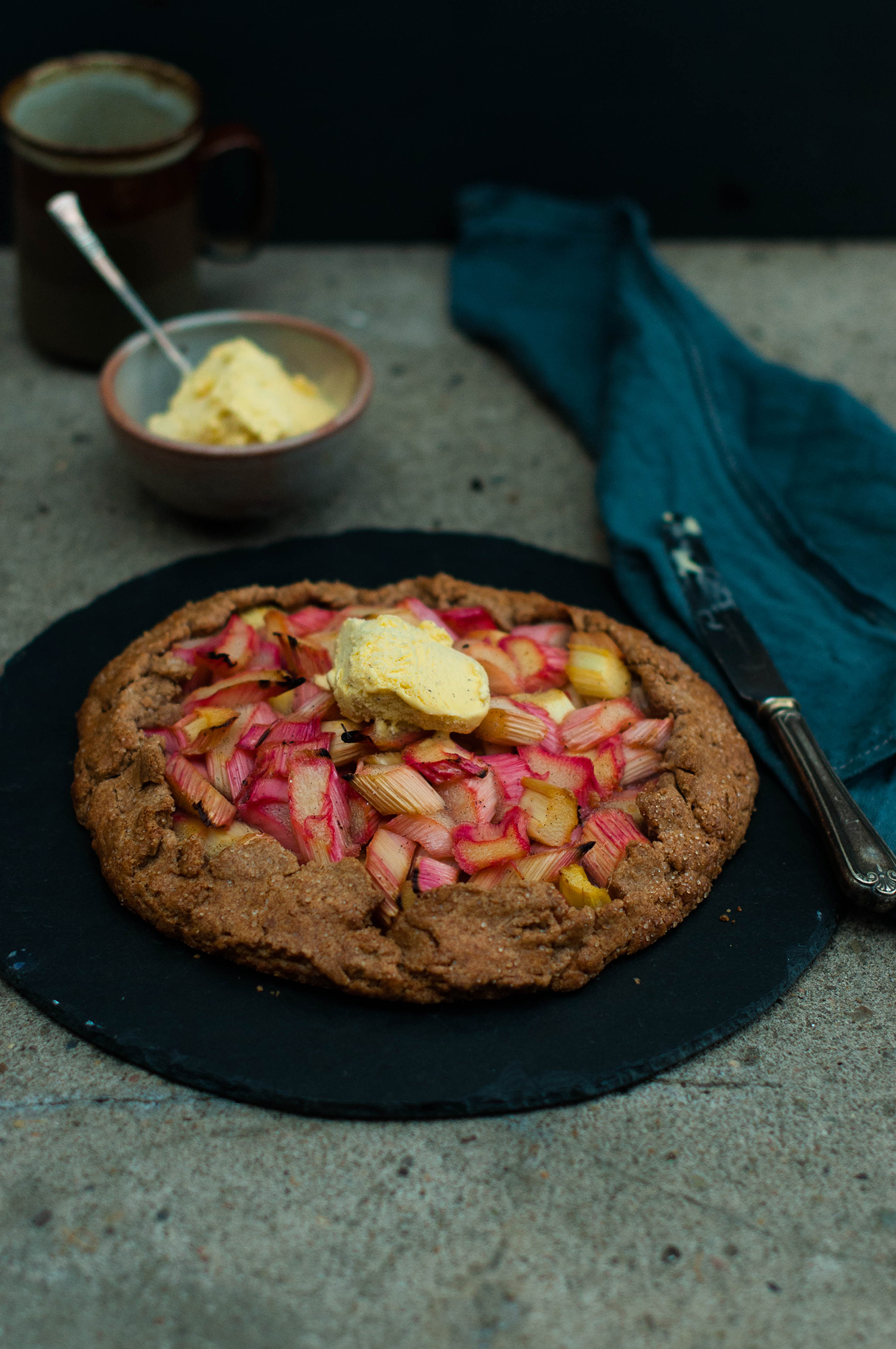 Rhubarb requires cooking, baking or poaching, and the vegetable (yes, it’s a veggie, not a fruit) tastes best when you add a couple of other flavours – think vanilla (my favourite), rasp- or strawberries, sugar or butter. 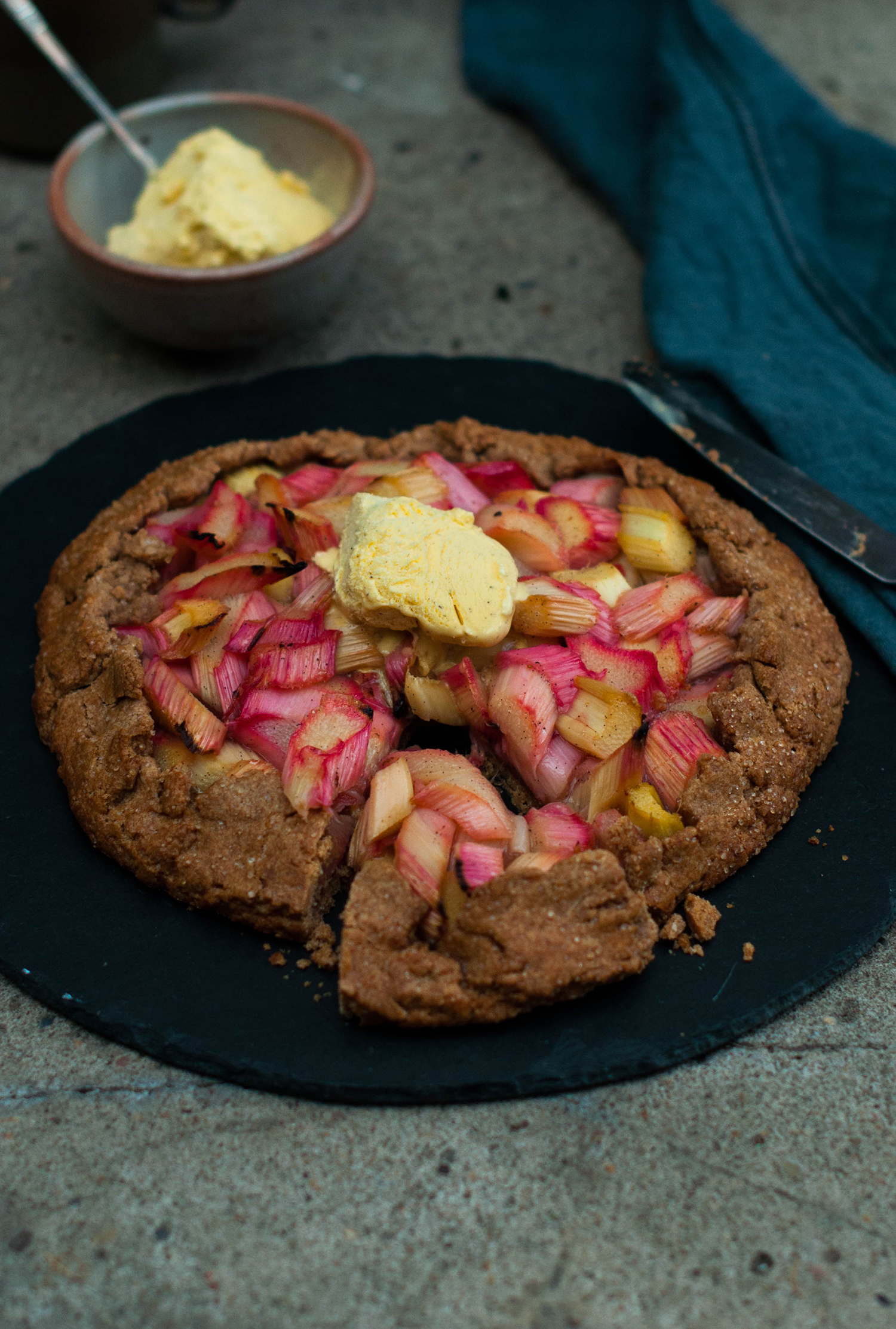 The other day I had some rhubarb leftovers from a shoot, and because I’ve already been standing in my kitchen for a couple of hours I fancied a simple and quick way to use up my rhubarb leftovers. I generally think there’s no easier and quicker way to make a cake than with baking a galette. Please believe me when I say that, despite its easiness and quickness, this galette is a dream of a cake: a nutty and flaky crust, filled with the sweetest, softest and most aromatic rhubarb vanilla filling. The only thing that makes this galette even better is a scoop of ice cream – so go for the whole thing here, it’s worth it! 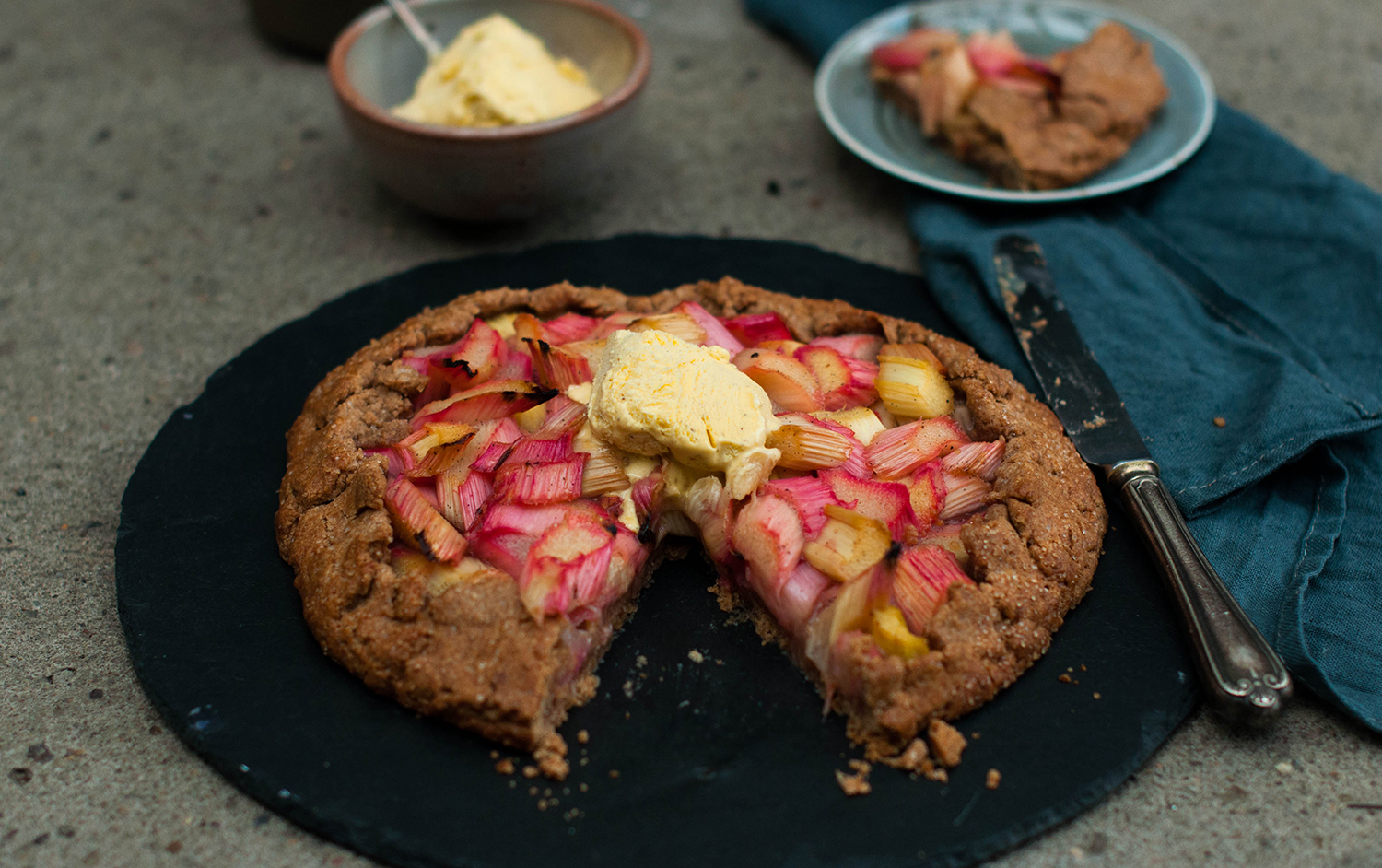 Let’s hope for more sunny days, I can’t believe I’m actually running in shorts and t-shirts again in the early mornings – it’s such a happy time of the year! 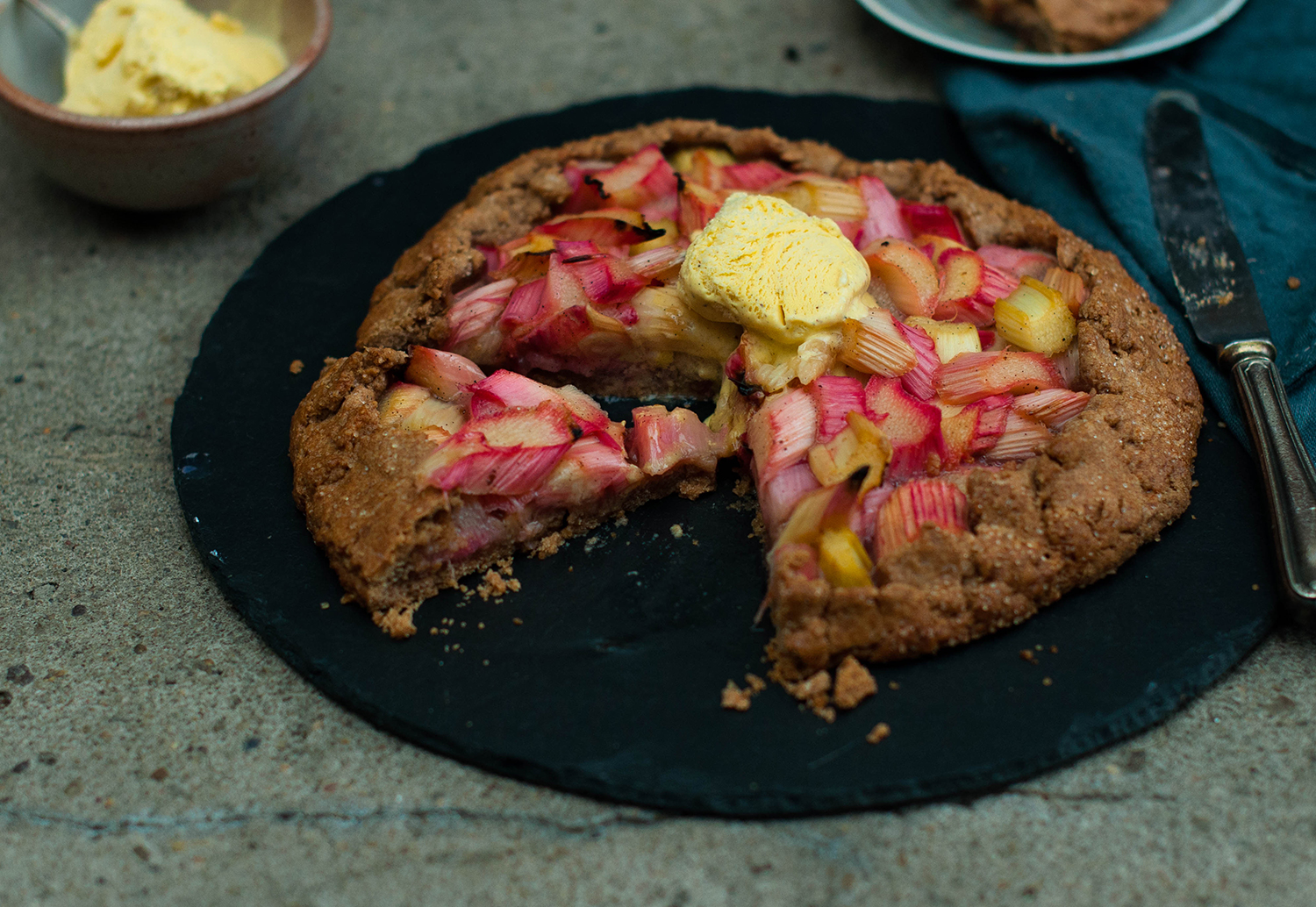 Method:
For the crust, mix the flour and sugar in a bowl. Knead in the cold butter, cube after cube. Separate the egg (you’ll need the egg white later on), add the egg yolk to the crust, then add 2 tbsp cold water and knead the crust with your hands until all ingredients are incorporated and the crust forms a soft ball. (Alternatively, let a food processor do the work). Add another tablespoon of water if necessary.

Wrap the crust in cling film and set aside in the fridge to cool for 30 minutes.

In the meantime, wash the rhubarb stalks and remove the ends. Cut the rhubarb into 1 cm thick pieces, transfer the pieces to a bowl and mix with sugar and the core of the vanilla bean.

Preheat the oven to 180°C (fan). Line a baking tray with baking paper.

Knead the crust with your hands once again, then roll it out thinly between two layers of cling film (you are aiming for a 20–25 cm wide circle). Transfer the crust to the prepared baking tray.

Sprinkle the semolina, polenta or corn starch onto the crust (to avoid the crust from becoming soggy), then add the prepared rhubarb to the centre of the crust, leaving out a rim of approx. 3 cm.

Now carefully fold the edges of the crust over the rhubarb. Don’t worry if the crust breaks, simply “glue“ it back to the crust with your hands.

Now brush the outside of the galette with your egg white, and sprinkle it with some brown sugar.

Transfer the galette to the oven, and bake the galette for 35 minutes until golden brown. Cover with foil in case the rhubarb is becoming too dark.

Allow the galette to cool slightly, then serve warm with a scoop of vanilla ice cream, or keep it in the fridge until required – it tastes amazing, too, when chilled!

The galette can be kept in the fridge for up to four days. 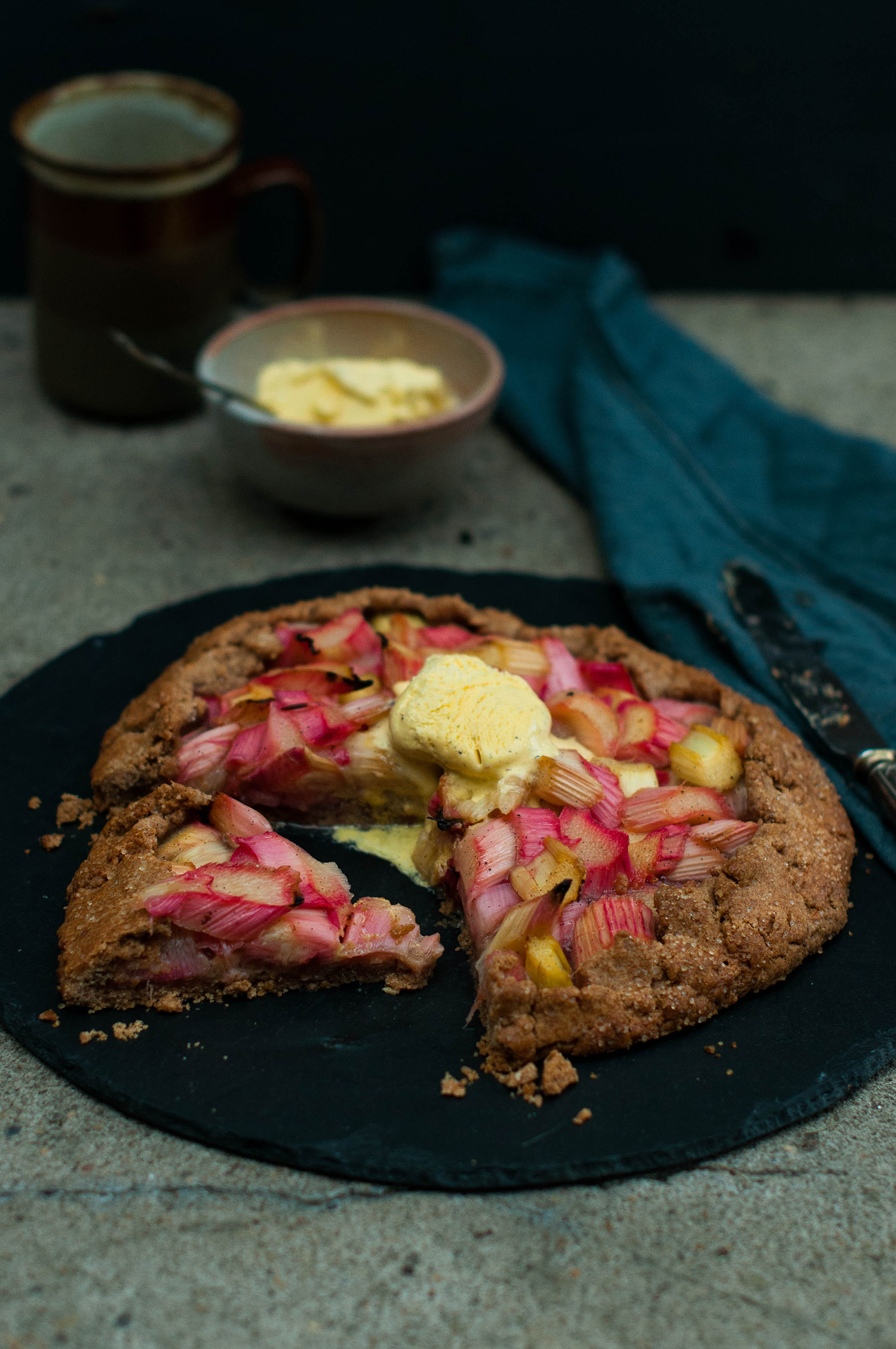 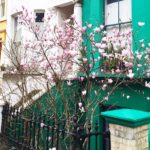 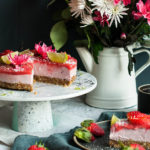